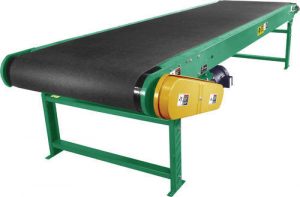 A belt conveyor is one of the most basic as well as most used tool within any industry that handles material on a daily basis. However, they are more commonly found in industries or companies that transport materials such as sand, salt, ores, grains, coal and even overburden. Our article goes into some detail about what belt conveyors are.

These systems are composed of two or more drums which are referred to as pulleys. In order for the belt to move as it carries the desired material forward, either both or simply one pulley must be powered. When the pulley receives power, it is referred to as the drive pulley, in essence, the remaining unpowered pulley is therefore termed as the idler pulley. It should be noted that the conveyor system that you find in a particular field can be different from that in another.

This just simply means that the system found in an agriculture environment which moves huge volumes of resources is in a different class when compared to the one that is found in an indoor facility moving boxes. As such, the use of the system determines the material that belts are manufactured from whether it be rubber or PVC. And, the belt can also be composed of one or multiple layers of the desired material.

In most cases, belts are composed of two layers in which the top layer is referred to as the cover while the bottom is known as the carcass; and it goes on to provide both shape and strength. The belts cover is usually made from plastic or rubber compounds and the carcass can be made from cotton, nylon or even polyester.

As we conclude we have just looked at what belt conveyors are. Additionally, a belt that contains partitions in-between is referred to as an elevator belt and is used for material transportation up an incline. And, in some cases they can also be used on live bottom trucks!